Fine wine managed to maintain its upward movement in February despite the headwinds that affected mainstream assets, including slowing GDP growth, rising inflation and Russia’s invasion of Ukraine.

Château Lafleur has received multiple high scores from leading critics in February. The Pomerol estate’s 2019 and 2018 vintages were recently reassessed by Neal Martin, Antonio Galloni (both Vinous) and Jancis Robinson MW as part of wider retrospectives.

Robinson rated the 2018 19-points, saying it had ‘real energy’. The wine has appreciated in price over 100% since its release.

The 2019, meanwhile, was scored 100-points by Martin during his in-bottle tasting of the vintage. He deemed it an ‘awe-inspiring Pomerol’ that ranked alongside the 1982 and 2000. He did add that it was wine that needed time ‘to reach its zenith’. Fellow critic at Vinous, Antonio Galloni, rated it 98-points. He agreed with Martin that it was a wine that needed time and that its energy ‘focused inward’, but one where ‘the purity of flavours is just unreal’. The wine is also currently up over 100% since its release in 2020.

Fine wine prices saw a modest increase in February. Among the biggest movers were two wines from Bordeaux’s 2009 vintage, which went up 4.8%. But while Château Pontet-Canet has more than doubled in value since release, Château Lafite Rothschild remains available at a discount to its release price.

The Super Tuscans Sassicaia and Tignanello 2016 also rose 4.8% and 2.9% respectively. The two brands are Italy’s best-performers over the past three years. The top-performer in February, however, was Poggio di Sotto Brunello di Montalcino 2016 which went up 6.2%. 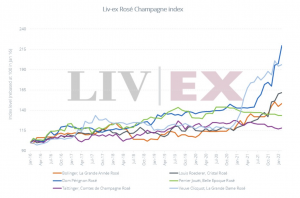 In 2021, the Champagne 50 index was the best-performing sub-index of the Liv-ex 1000. Although the index is led by classic ‘blanc’ Champagne, demand for Champagne as a whole is also driving trade in the pink version too.

Rosé accounted for 16% of total Champagne trade in 2021, driven primarily by demand for four key labels: Dom Pérignon, Taittinger’s Comtes de Champagne, Louis Roederer’s Cristal and Bollinger’s La Grande Année. The price performance of the individual wines can be seen in the chart above.

Italy is one of the fastest expanding regions in the secondary market. The country has seen a sustained increase in the number of wines trading – which have grown fivefold in the last five years – pointing to heightened demand for its fine wines. Over the same period, the number of Italian regions traded on Liv-ex has risen from 16 to 68.

With more ‘drinking’ wines enjoying secondary market demand, a greater number of Italian regions are starting to trade. But regular investment interest remains centred on Tuscany and Piedmont. These two regions combined account for 97% of the country’s trade by value and are home to many of the country’s top-performing wines.

The Super Tuscans are getting more expensive

Over the past three years, Tuscany has rewarded collectors with the best returns. As the chart below shows, the Tuscany index (35.6%) has outperformed the broader Italy 100 index (31.7%) and its northern neighbour Piedmont (18.5%). 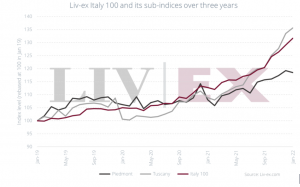 Tignanello and Sassicaia are brands on the move

The most affordable Super Tuscan Tignanello has been Italy’s biggest riser. The brand’s value has increased 74.7% over the past three years, just above that of Sassicaia – 74.4%. From Tignanello, the 2018 vintage has led both activity (by value and volume) and price performance in the last year. The wine has been the third-most traded from Tuscany overall, surpassed only by Sassicaia 2017 (2nd) and 2018 (1st). Over the past three years, Soldera Case Basse has risen 42.4%, Solaia 37.8%, Masseto 34.3%, and Ornellaia 30.7%. 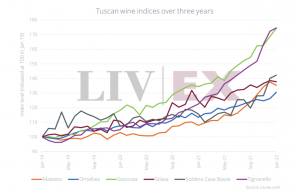 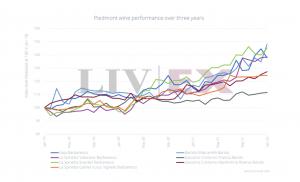 Italy offers accessible points of entry and strong investment returns. Its expanding secondary market is attracting drinkers and collectors, while its biggest brands continue to deliver impressive performances. In recent years, Piedmont has gained a larger share of the market by value, while Tuscany is seeing its fine wines record greater price gains. So far in 2022, both Piedmont and Tuscany have accounted for equal levels of trade.

Are you looking to start investing in Wine? Contact the experts at Vinverum Wine, or download our brochure to get started. 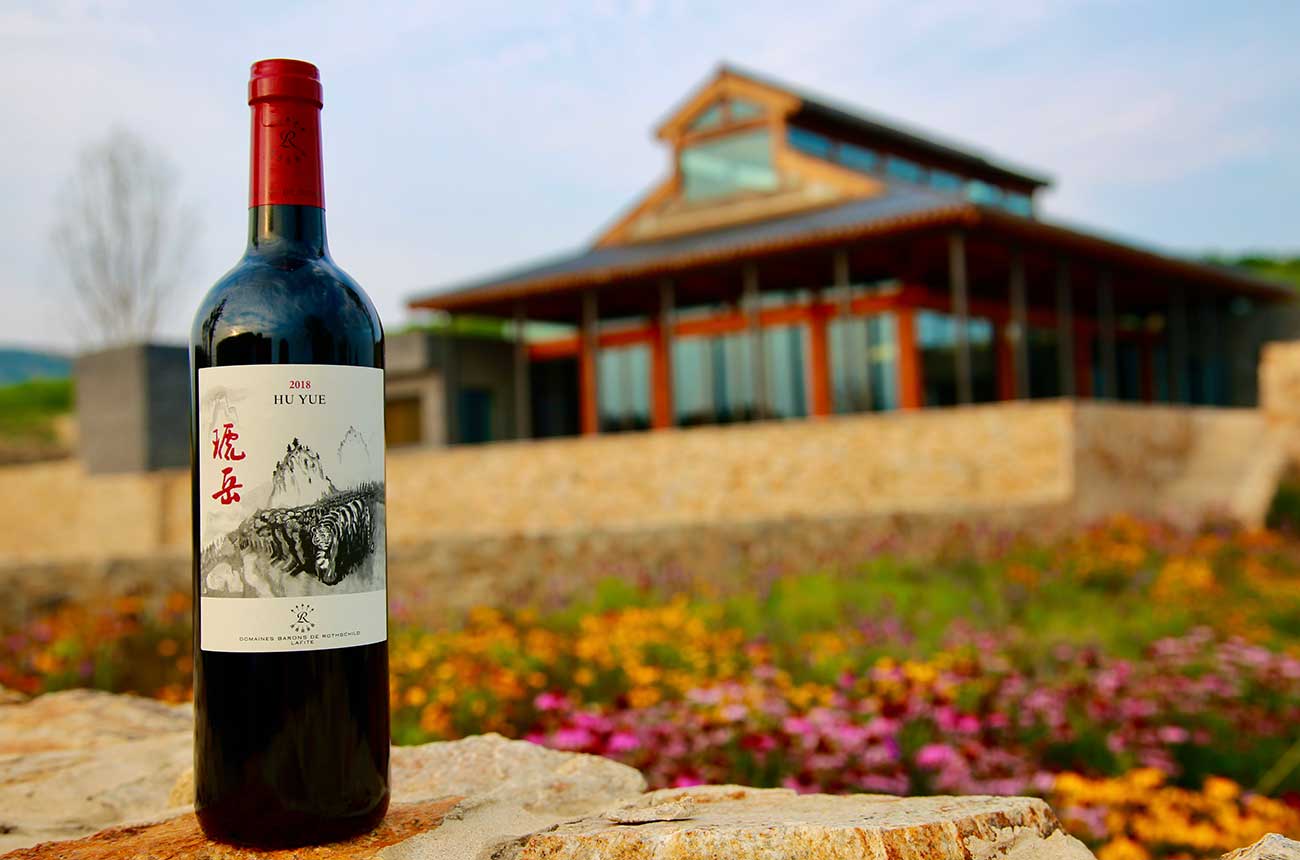 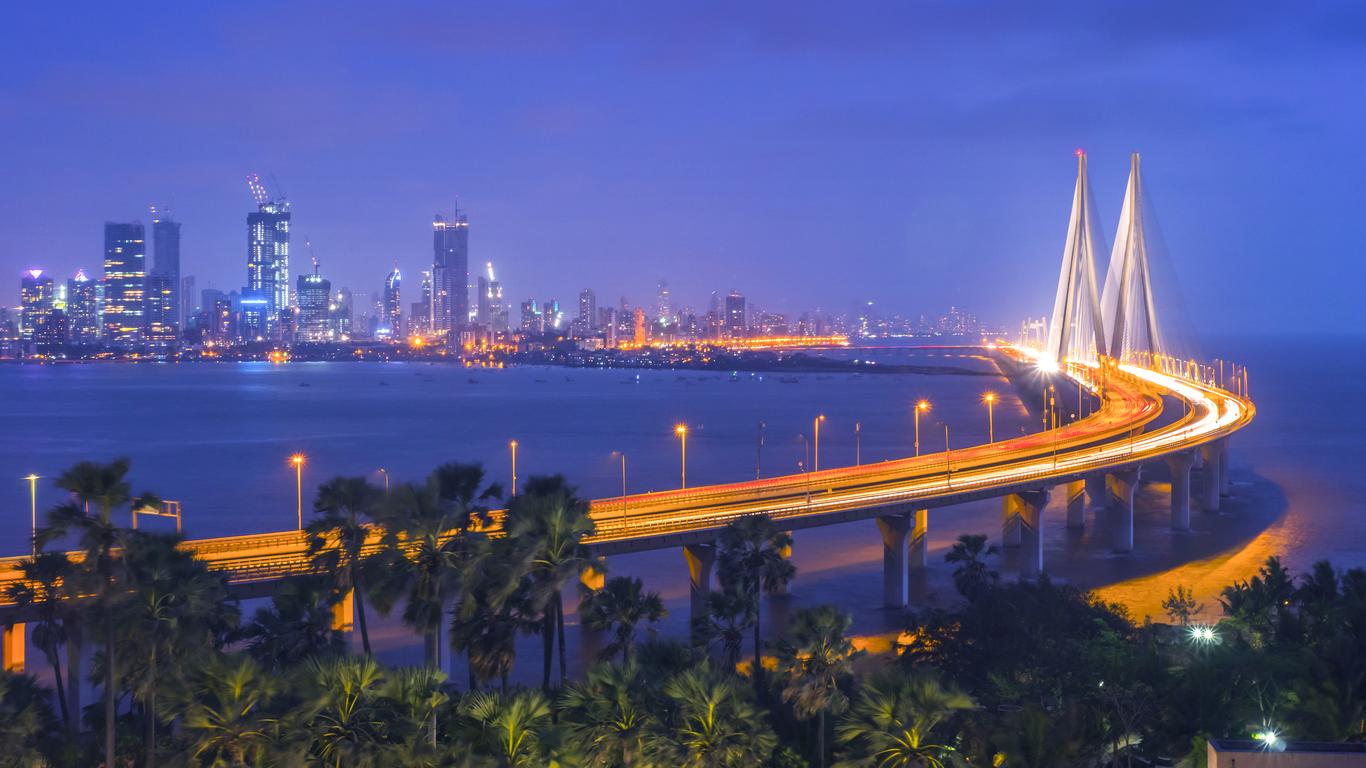 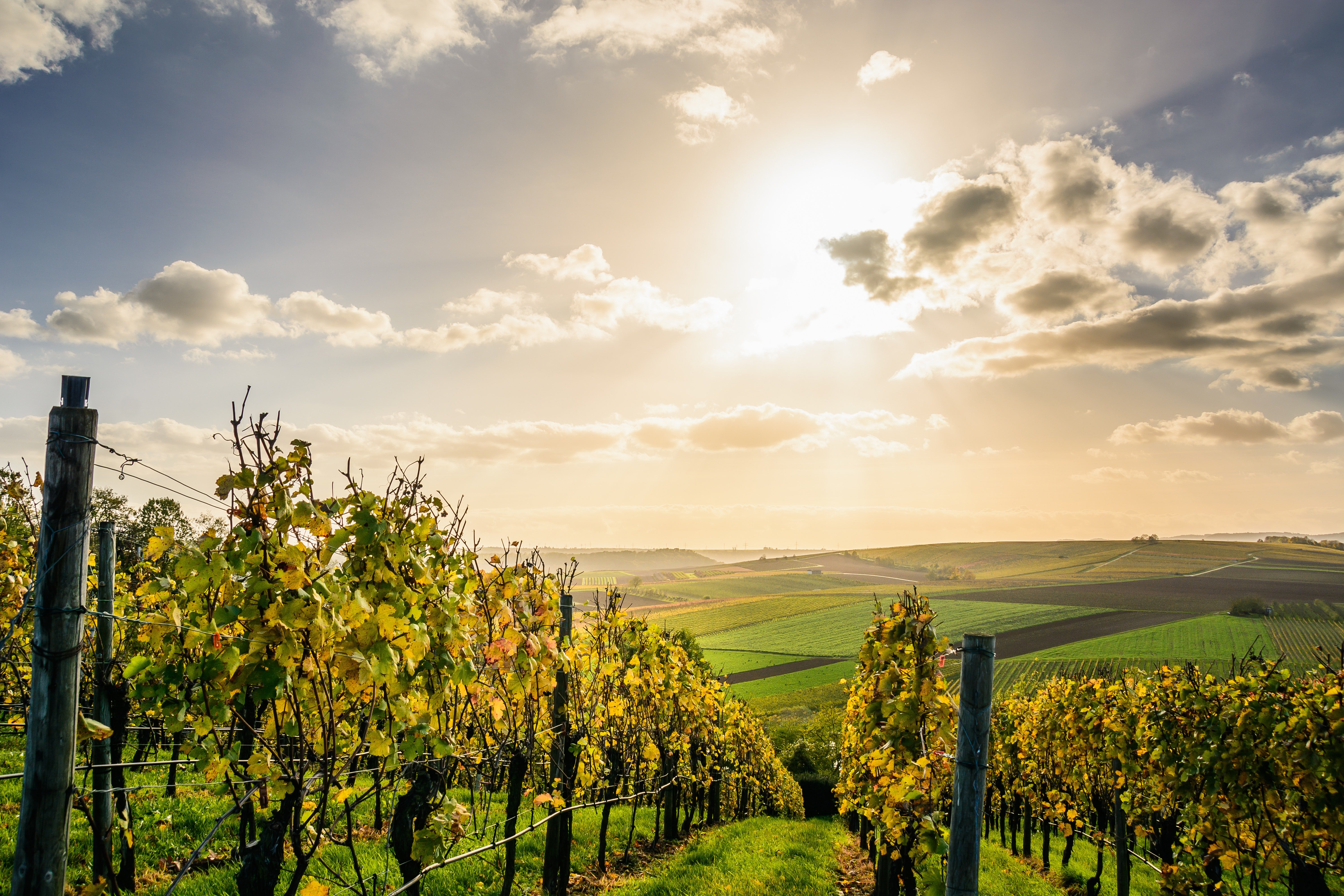